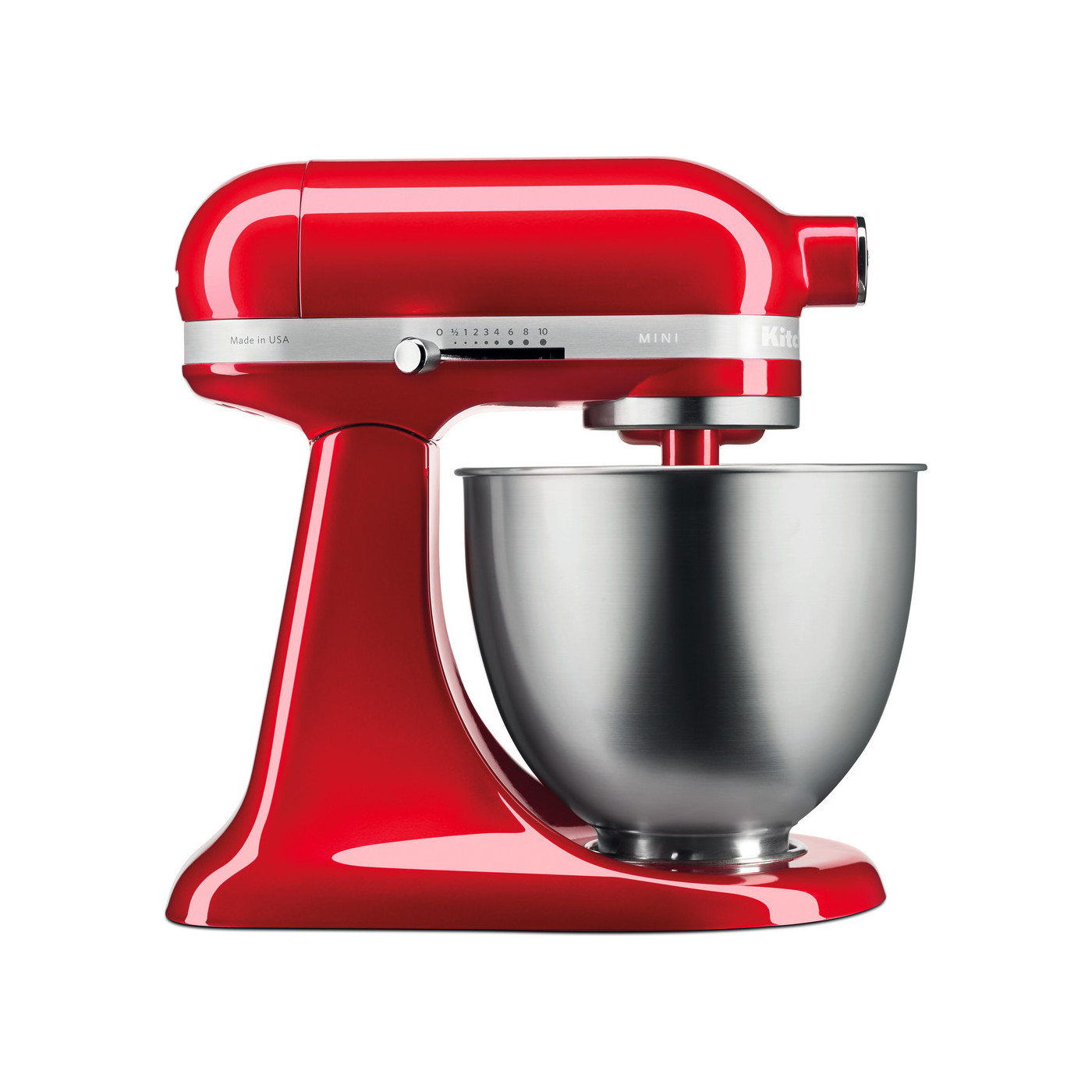 The little brother of KitchenAid’s highly regarded Artisan 5KSM175 pastry blender, which has just been put on sale, hopes to attract a slightly less demanding clientele of pastry lovers. Here is our complete test of this Artisan Mini 5KSM3311X.

The Artisan Mini 5KSM3311X is the latest food processor from KitchenAid. This model has been specifically designed to cater to cramped kitchens, so the brand offers models that satisfy most customers. Indeed, the Artisan Mini is smaller than the Artisan 5KSM175. At the same time, it is also offered at a more affordable price, since it is sold at about 529 €. At this price, it includes a 3.3-liter capacity bowl and a 250W direct drive motor. Nevertheless, the manufacturer assures that this robot will offer the same versatility as the robot that heads the range thanks to the many accessories it offers.

Comparison with other models of the brand

Despite everything, the Artisan Mini is not as well equipped as its big brother. For example, we notice the absence of handles on the stainless steel bowl. Indeed, this stainless steel bowl does not include a handle to facilitate handling. Furthermore, KitchenAid did not deem it necessary to provide an anti-splash cover. Instead of this accessory, the robot offers a half-speed to avoid any risk of splashing. But this will not replace the anti-spattering lid.

Here are the features of the three models in order of size and price:

The artisan Mini food processor comes standard with a whisk, a flat beater and a hook.

The mixer can be used for normal to thick mixes such as cakes, icings, cookies and mashed potatoes. The flat beater is aluminum with a non-stick nylon coating. The mixer is dishwasher safe.

This six wire stainless steel whisk is elliptical in shape. The whisk covers the entire surface of the bowl and allows you to whisk large quantities easily.

The hook can be used to mix and knead different types of dough, including bread, pizza and fresh dough. The hook is made of aluminum with a non-stick nylon coating. The hook is dishwasher safe.

A robot faithful to the brand’s style

In terms of design, the Artisan Mini follows exactly the same stylistic codes as its big brother, although its dimensions are reduced. Indeed, the Artisan Mini measures a little less than 20 cm wide against 41cm height when the head is raised and 31cm depth. It will be able to fit on small worktops without hindrance. The level of finish remains more or less the same as its big brother, with metal handles.

Nevertheless, its weight is quite high considering the size of the robot with a scale that shows almost 7 kg.

Offered in several colors, including matte black which particularly caught our attention as it gives an impression of quality, this food processor is therefore versatile and practical in several aspects.

A discreet and easy to maintain robot

In daily use, the Artisan Mini is one of the quietest food processors on the market. The direct drive motor never emitted more than 64 dB during the various tests.

For the maintenance of the food processor, KitchenAid has proposed accessories that are compatible with a dishwasher except for the whisk. The robot is rather well designed, which considerably reduces the difficult to clean areas. The corners that are often difficult to clean are mainly around the attachment system of the accessories that are located under the head of the food processor. But here again, a simple wipe with a damp cloth is necessary to remove the dirt. To do this, however, it will be necessary to ensure that the residue does not dry in these hard-to-reach areas.

Testing the features of the Artisan Mini

The Artisan Mini has a 250 watt motor, compared to 300 for its big brother. In use, this robot offers a choice of 10 speeds that will allow you to perform several operations:

A robot with many accessories… optional

The Artisan Mini is delivered with very few accessories. On the other hand, the manufacturer has thought of offering some as options. We are thinking in particular of the anti-splash cover which seems to us indispensable. Moreover, different bowls are also available in option.

KitchAid thought of including a motor exit on the front of the robot to give access to the same extensions as its big brothers. The robot will gain in versatility since it will be able to grate, slice, chop and make pasta.

Beware of the cost of accessories, which will quickly inflate the bill. Indeed, some extensions are worth several hundred euros. To save money, you’ll have to go through manufacturers of low-cost accessories that are compatible with the Artisan Mini.

Sober and efficient, the robot provides the essential in a disconcerting calm. The robot is relatively satisfactory despite some shortcomings. Indeed, its capacity of 3.3 l is rather limiting and makes it one of the smallest on the market. In addition, the design of the sheet limits its dough homogenization capabilities due to a poor integration of the flour. Nevertheless, it remains a good robot that we recommend if you are not expecting a result equivalent to a pastry chef’s service.