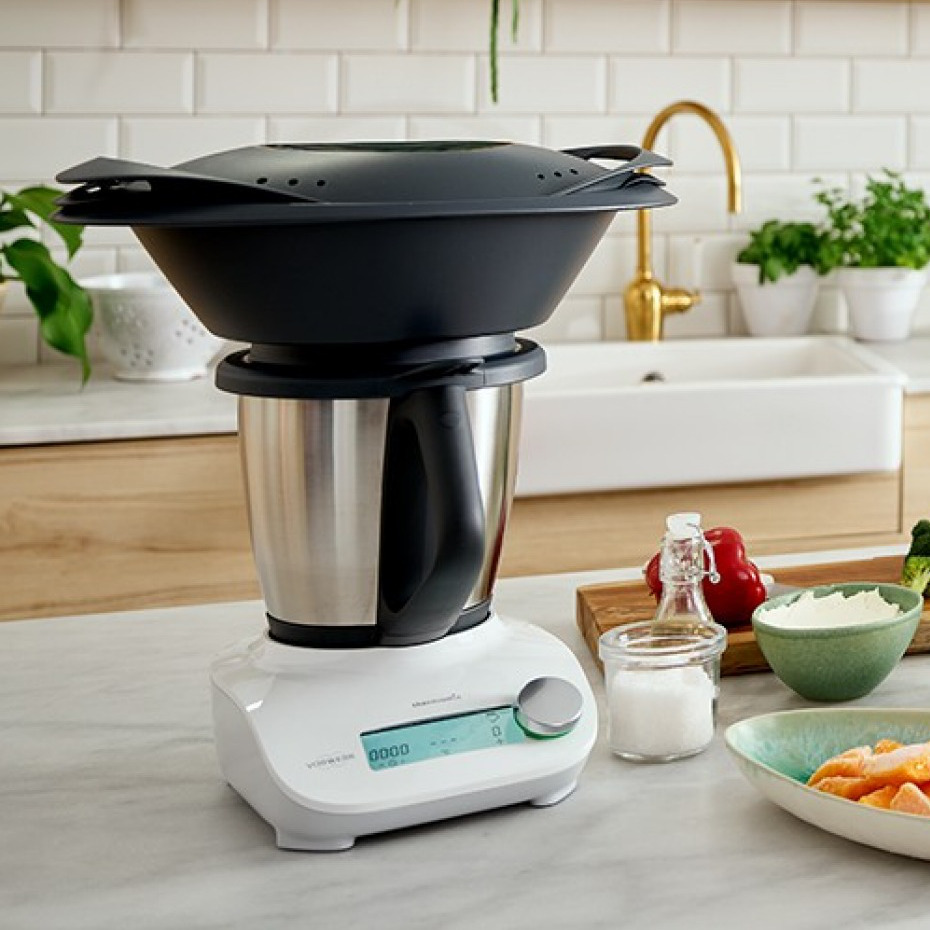 Vorwerk has just launched its brand new compact connected robot, the Thermomix Friend. This multifunctional robot is an extension connected via Bluetooth to the Thermomix TM6. This gives you the opportunity to expand your culinary horizons by preparing food in parallel. Small focus on this new robot.

The Thermomix Friend : What does it bring more than the TM6?

The Thermomix Friend comes on the ultra-competitive market of food processors with reduced functionality and features. So of course we spontaneously ask ourselves what it can offer more than its big brother, which is already ultra complete for daily use.

In reality, this is not a low-cost version of the TM6. Indeed, this robot cannot be self-sufficient. In fact, it was presented by Worwerk as a complement to the TM6, since the Thermomix Friend works simultaneously with the latter.

The complementarity of the two robots can be explained on several points. First of all, this robot will allow you to produce dishes simultaneously or even double the quantities when you receive a large number of people. Another usefulness of this multi-function robot lies in the fact that it can make in parallel certain recipes requiring two specific preparations. For example, we think of a recipe combining custard and chocolate fondant for which you will no longer need to carry out the operations successively but at the same time. In addition, the Thermomix Friend can also be used to keep a dish warm when another dish is being prepared in parallel with the main multi-cooker.

Although it is capable of cooking, mixing, simmering, steaming and keeping warm, the Thermomix Friend’s functionality is still more basic than that of the TM6.

First of all, it is important to point out that it is unable to work completely autonomously since it only works when connected via Bluetooth to a TM6. In fact, it is the big brother that sends the cooking programs to the Thermomix Friend. Note that this robot is also compatible with the TM5 although it does not have Bluetooth functionality. The user will then have to enter the cooking programs manually.

Also note that this robot cannot mix. It focuses only on steaming or simmering. However, if the recipe requires you to mix the preparation, you will have to install the bowl on the TM5 or TM6 to ensure mixing. Moreover, the companion food processor only offers 2 speeds of blade rotation, and only in the opposite direction. Therefore, it is impossible to make snow white or to stir the pancake batter.

The Thermomix Friend offers cooking temperatures between 37°C and 120°C, making certain preparations such as caramel impossible. Recipes suitable for the Friend robot are all available on the recipe platform managed by Vorwerk, Cookidoo. At launch, almost 40 recipes are already available and the list will continue to grow. All of these recipes start from the main robot, making it impossible to use the companion as a cooker robot on its own.

In terms of design, the Thermomix Friend is a small, compact robot. However, even though it is smaller, it is capable of accommodating a large bowl up to the capacity of its big brother, the Thermomix TM6. Note however that this bowl will not be supplied with Thermomix Friend. The base of the robot is less elaborate than that of its big brother. However, it is still equipped with a wheel and a non-touch digital screen. The base has a thermal sensor and a heating system.

Our opinion on the Thermomix Friend

Beyond the strong reputation of the German leader, the strength of Thermomix lies in its ability to produce complex dishes to perfection. The Thermomix friend consolidates this asset by widening the range of possible recipes that can be created with the help of a multi-cooker robot. Offered at its launch in 2 versions, the Thermomix friend is sold at 399€ without including the base. This offer is intended for users with an additional bowl. The 2nd offer includes an additional bowl for 499€.

At this price, it is obvious that this robot cannot have the same characteristics as the TM6. For example, the motor is limited to 200 rpm which is not enough to be able to mix.

The Thermomix Friend can also be purchased with the sole purpose of increasing the capacity of the bowl. Indeed, many users regularly complain about the lack of capacity of the bowl, although it is one of the largest on the market. In this sense, the preparations will be suitable for families of more than 5 people. Some recipes are even suitable for up to 10 people.

Overall, we appreciate the ease of use offered by this multi-cooker robot thanks to its guided cooking. The ergonomics of the robot makes its use very intuitive. In addition, the Bluetooth connection with the Thermomix TM6 is very efficient since it allows us to save precious time that can go as far as making dishes in half the time. Finally, we also appreciate the fact that all the utensils of the TM6 are compatible with the companion. The harmony between the two is therefore ideal to facilitate the cooking experience.

However, we regret that the Thermomix Friend cannot manage automatic programs. The screen is also too small, making it impossible to integrate the guided kitchen, which can only be viewed on the main robot. We also regret the lack of availability of the Thermomix Friend since it is very limited. Indeed, it is only offered for sale by Thermomix advisers. It is therefore impossible to buy one in supermarkets. However, if you get in touch with a Thermomix advisor, you will have the opportunity to attend a live demonstration to learn how to use the device and thus validate your final choice.

As you will have understood, this is not a mini Thermomix, but rather an extension of the TM6, capable of cooking, mixing, simmering, steaming and keeping warm. The mixing functions will remain the responsibility of the main robot.

Not a full-fledged multifunctional food processor, the new Vorwerk appliance will act as a duo, allowing you to prepare both classic and festive meals in less than half the time.