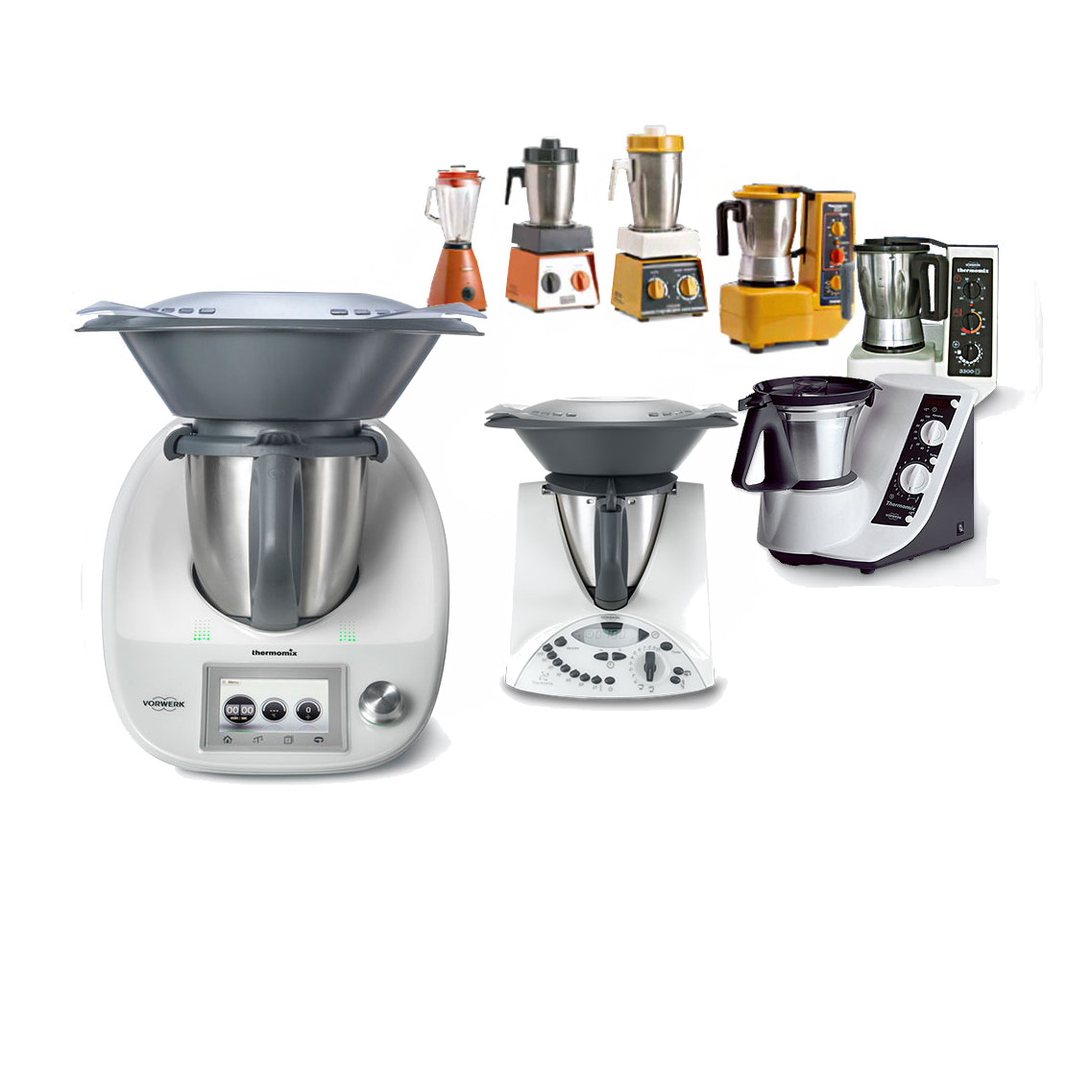 No need to introduce the Thermomix. It is one of the leading multi-cookers on the market. The brand benefits from its notoriety built over several decades. That’s why the brand sells its robots mainly through the home sales channel, following live demonstrations. However, the robot’s sales are running out of steam and are struggling to keep up with increasingly aggressive competitors. That’s why we’re going to focus in this article on the elements that we think can be improved in order to become the undisputed market leader again.

Released during 2019, the Thermomix TM6 could be offered for sale during the next 4-5 years, following the example of what happened with its predecessor. In an increasingly competitive food preparation market, the manufacturer Vorwerk must continue to offer new products to maintain its position as market leader.

An increasingly competitive sector in 2022

There are more and more manufacturers of multifunctional food processors on the market. However, after many years of growth, the sector has experienced a slight slowdown in 2019, despite the excellent commercial success of the Mr. Kitchen Connect from Lidl and the launch of the new TM6.

Currently priced at $1,299, the TM6 represents a fairly large budget compared to its main competitors, which are positioned up to 3 times cheaper for the cheapest of them. Over the years, the offer of these competitors has expanded in order to propose a quality product and more and more complete.

Today, Vorwerk backs up its prices with its brand image and a full warranty including parts, labor and comfort service over 2 years. However, this competitive advantage will not last forever. Indeed, although it remains the leader in the sector, the manufacturer’s market share is shrinking. In order to maintain this leadership, it is obvious that Vorwerk is revising its offer downwards as the price is less and less justified. On the other hand, if it decides to maintain this price, it would be interesting to offer more content or features to the customer.

Friday, November 25 we are expecting new Thermomix offers Purchase. Depending of your country, if you order one Thermomix TM6, you can get 30% off the VB100 Cordless Vacuum Cleaner this November. Discounts are also expected on accessories.

The Thermomix TM7: a robot destined to win back

German manufacturer Vorwerk is struggling to maintain its leadership position in an increasingly competitive multifunction food processor market. The competition from certain so-called “low-cost” brands has not helped the manufacturer’s sales either, with appliances offered at up to three to four times less expensive. The latter offer quality preparations at very aggressive prices.

However, after two difficult years in terms of sales figures, the manufacturer Vorwerk has experienced a slight improvement in 2020, which is mainly due to the sales effort on digital products to reduce the impact of the health crisis and regain ground against its competitors.

Thus, with an estimated release around 2023-2024, the TM7 should not repeat the mistakes of the robot it replaces. First of all, the TM6 sales suffered a lot from the lack of communication from the manufacturer. Indeed, during its release in 2019, Vorwerk did not want to communicate on the event. Many customers have therefore found themselves wronged by buying the TM5 while its replacement was just about to be marketed. Slight communication failure.

Therefore, the TM7 will have to improve its entry on the market by taking care of the communication. Moreover, to give a second wind to the sales, the manufacturer intends to widen its distribution network in France. Since one year, there are now 4 points of sale opened in France against only 2 historically. The expansion of the network does not stop there since the brand intends to open about fifteen stores around the largest French cities by 2023. However, no sales in supermarkets are planned for the moment. This effort to promote the Bimby (nickname for the Thermomix in Italia) could lead the TM7 to regain market share lost in recent years.

The search for excellence

Since low-cost robots are quite capable of providing quality services, what finally drives customers to buy the TM7, at a price 3 to 4 times higher than these devices? The search for excellence is part of the answer. Indeed, nothing must be left to chance, both in terms of cooking quality and the features of the robot. Although it offers some of the best cooking qualities, the TM6 has a few flaws that the TM7 will have to correct. These defects concern the limits of certain functions, the absence of certain programs, etc. To do this, the brand will have to align itself with the best of the competition, while making sure to offer new features despite everything.

The current shortcomings of the TM6

Overall, the TM6 has very few design flaws. However, there are some interesting customer feedbacks to consider.

One of the biggest limitations of the TM6 is the size of the bowl. Indeed, with a volume of 2.2 liters, it is in the low average of the high-end robot market. Unfortunately, this volume is too small to ensure the preparation of dishes for a family of 6 people. Some competitors offer a volume of up to almost 4 liters. The new TM7 should offer a larger volume to maintain its leadership.

The Moulinex I-Companion Touch XL offers one of the highest capacity of the market with 4.5 liters, twice the capacity of the TM6. The TM6 is limited to 2.2 liters, which is just enough to prepare meals for 4 people. An effort will have to be made on this side, knowing that the Moulinex offers a good level of cooking quality despite the large capacity of its tank. The task is therefore not insurmountable.

A less noisy product: despite a remarkable effort on the TM6, the product is still noisy. Therefore, the new Thermomix TM7 should continue to reduce the noise through other innovations.

New features: It would be interesting to integrate a grating or slicing function to the robot. Indeed, these 2 tasks are recurrent in the kitchen world and some competitors already integrate them. In a few years, the integration of these functions should become the market standard.

The new scale installed on the TM6 is accurate to the gram. This integrated scale allows you to weigh food in the middle of preparation. Unfortunately, some customers have reported a failure of the scale to display a weight that is different from reality. This is due to an electronic problem related to a sensor that tends to unsolder.

Although it only affects a minority of products, the brand will have to look into this design flaw to correct it with the TM6 replacement. This is the only defect we found on this robot, which is very well designed overall.

Also, in a context of increased competition, the Thermomix TM7 will have to redouble its efforts to distinguish itself from other high-end multifunction robots.

On the other hand, the TM6 takes a long time to warm up. Surprisingly, it takes longer than the TM5 with 11 minutes to reach 40°C against only 4 minutes for the TM5. In this respect, the CookEasy + is one of the fastest food processors on the market. Its speed of execution does not prevent the precision of cooking temperatures, avoiding overcooking. Although the TM6 respects the required temperatures, its future replacement will have to gain in heating time to be in line with the best on the market. The noise emitted by the TM6 is also in the high range of the market of high-end robots. For comparison, and with the same function, the TM6 emits on average 10Db more than the Magimix Cook Expert and even 15Db more than the Moulinex Cuisine Companion, despite the efforts made. In this sense, it is less comfortable to use, especially in an open kitchen. The brand will have to continue its efforts in noise reduction to be in line with the leading appliances.

The TM6 can neither grate nor slice, at a time when a large number of food processors offer this. It is therefore inconceivable that the TM7 still lacks these features.

A wider distribution network: unfortunately, the TM6 is mainly available only through a direct sales network on online platforms. Indeed, Vorwerk has 2 stores in France offering the robot for sale. However, competitors are managing to recover market share on the Thermomix since they are available in the major household appliance stores. By developing its distribution channel, Vorwerk could consolidate its leadership.

The qualities that the TM7 must absolutely maintain

One of the main advantages of the thermomix is its ease of use, with clear and simple instructions to follow. The accuracy and precision of the instructions ensure that the recipes are a success. In addition, the food processor has the largest digital screen on the market with a diagonal of 6.8 inches. This makes it easier to navigate and read. The Thermomix TM7 should therefore retain this ergonomics while conscientiously integrating potential new features and without distorting its “user friendly” spirit. Also, the brand provides a list of more than 40,000 recipes via its Cookido subscription service. This completeness allows users to vary the recipes, unlike the majority of the brand’s competitors, which only offer a limited choice of recipes, which the user will quickly forget. This feature will certainly be repeated on the TM7.

A robot in the age of home automation?

In short, the Thermomix, Vorwerk’s flagship product, has a bright future ahead of it. The Thermomix should remain the reference for building a varied “Batch Cooking” program that saves you time. The quality of the product, the materials chosen, and the results of the dishes produced by the robot will certainly ensure its continuity. Only a few elements, and in particular the capacity of the bowl, seem relevant to us to be improved. However, it is important to take better care of the communication about the future replacement of the TM6. Indeed, the arrival of the last model was done in total anonymity. That had in particular caused the anger of the purchasers of the preceding model just before the release of the TM6. Indeed, they had a product that had already become obsolete, a few days after the launch of the new product. The lack of communication had also slowed down the launch of the product, which had one of the slowest starts in its history. We’ll keep an eye on Vorwerk’s announcements to keep you updated on the release date of the new Thermomix TM7.

Between now and the TM7’s estimated 2023-2024 release, it seems unlikely that the robots will be doing all the work automatically. Despite the recent presentation of Moley Robotics and its robotized kitchen capable of reproducing human gestures, this advance is still not very industrializable on a large scale, given the high production costs.

On the other hand, we can hope for some technological advances. Indeed, the TM7 will not only have to match the best features of the market. On the contrary, the brand will have to continue the tradition by offering a lot of novelties at each release.

Since home automation is taking up more and more space in homes, it’s easy to imagine that the TM7 will offer even more connected services. Several devices are already able to offer information about the user’s habits. Whether it’s a home automation shutter, a connected scale, or a connected vacuum cleaner, there are many devices that can provide information that the robot could use. For example, a roller shutter programmed to open late in the morning could indicate that the user has had a very late breakfast. Therefore, the robot could suggest a later breakfast time.

Also, robots tend to gain in intelligence. We can imagine, for example, that the TM7 could let the user indicate his personal information (weight, height, age) and let the robot propose a list of meals, or even a weekly meal plan, adapted to his situation and to his objectives. The potential created by home automation is therefore powerful and is still in its infancy.