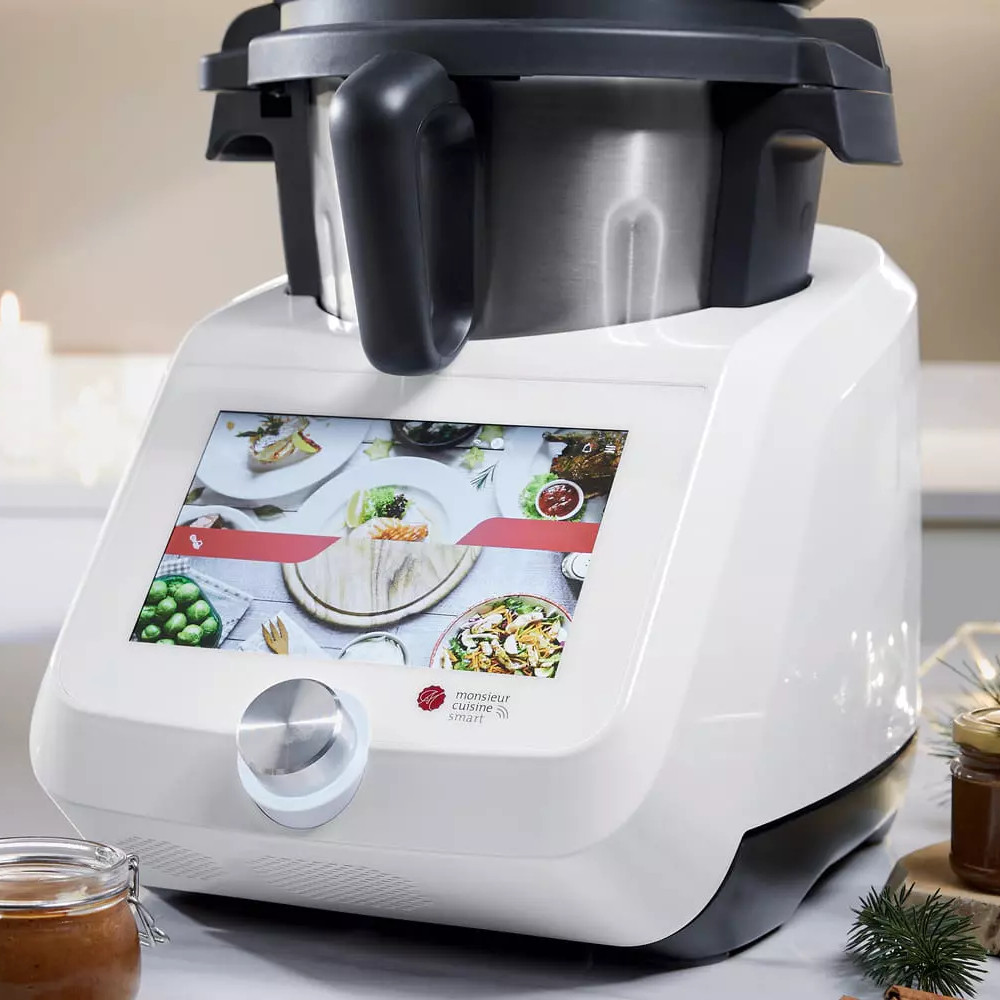 A food processor that is benefiting from the aura of its predecessor, the Monsieur Cuisine Connect

Launched for the very first time in the summer of 2019, the Monsieur Cuisine Connect food processor from SilverCrest and distributed exclusively by Lidl has created a fervor around multi-cooker robots. Once unaffordable, the Monsieur Cuisine Connect has greatly contributed to simplifying access to these products with much more accessible prices. With a huge national success, this model has since suffered the arrival of dozens of “cheap” multi-function food processors, all aiming to dethrone the undisputed market leader. In order to preserve its leadership, the manufacturer wanted to quickly replace its flagship product to offer more and more novelties and to improve the robot’s quality/price ratio. There is no doubt that this model is preserving the qualities of its predecessor and contribute to the manufacturer’s sales figures.

The aesthetic changes of the Monsieur Cuisine Smart

In terms of aesthetics, the Monsieur Cuisine Smart looks very similar to the Monsieur Cuisine Connect. The bowl, for example, is still standing above the engine block. The only notable physical difference is the handles, which are now 3 in number. A central handle is now installed on the bowl to make it easier to handle the bowl when it is full. If you are not used to the Monsieur Cuisine Connect, you will certainly not have noticed the enlargement of the screen from 7 to 8 inches. According to the manufacturer, the responsiveness of the touch screen has been improved. On the other hand, no information has been communicated about the integrated scale which showed some latency on the previous model. We hope that these display bugs will be fixed. So we’ll see if this problem persists on its replacement.

Technical changes of the SilverCrest Robot

Inside the robot, the changes are more interesting. Indeed, the manufacturer has revised its copy and corrected some of the main defects of the Monsieur Cuisine Connect. One of the main new features of the Monsieur Cuisine Connect Smart is its significant increase in power. This new version is indeed equipped with a new motor much more powerful, going from 800 watts to 1000 watts according to the manufacturer. This will allow it to knead twice as much dough, whereas previously the motor showed signs of weakness for the same quantity. In addition, some automatic baking programs are added to the final copy. Fermentation, simmering, egg cooking, boiling water, making smoothies and vacuum cooking are among the new automatic programs.

The programs are accompanied by video-guided cooking for a certain selection of recipes.

Regarding the Google voice assistant, to avoid the controversy of the integrated microphone on the old model, SilverCrest voluntarily decided not to reintegrate a microphone on the new model. Therefore, the direct voice command will not be available on this robot. On the other hand, theMonsieur Cuisine Smart will be equipped with a Google voice assistant that could be used with a compatible device such as the Google Home Mini to interface with the robot. Through this assistant, the user should be able to effectively control the robot by voice. Indeed, in the first advertising images of the device, we see a woman asking to set the cooking temperature. During the spot, a Google assistant is easily spotted.

In terms of accessories, the Monsieur Cuisine Connect Smart is coming with the classic accessories, i.e. inner and upper steam baskets, a flexible spatula and a beater. Nothing new on this side to make your recipes. On the other hand, these recipes can be personalized and adapted to your parameters. In addition, the creation of a shopping list and other features such as weekly planning or recipe suggestion is possible directly on the robot.

Available for purchase for less than 400€ (399€ precisely), the Monsieur Cuisine Smart is costing you 40€ more than its predecessor. Considering the new features and the quality of the services, the price increase does not seem unreasonable. This should not dampen the enthusiasm of potential customers. With only two weeks to go before it goes on sale, Lidl’s Monsieur Cuisine Smart is already being eagerly awaited by customers. The release of the manufacturer’s models since 2019 has not ceased to cause sometimes crazy scenes on the shelves. In March, a woman had been transported to the hospital after a big scramble in the aisles of a store to get the robot. The multi-function robot was launched on December 6, 2021. In total, the manufacturer has offered nearly 180,000 units for sale at launch. This is the same total as for the launch of Monsieur Cuisine Connect.

All in all, the Monsieur Cuisine Smart comes dangerously close to high-end food processors like the famous Thermomix from Vorwerk. Its new features mean that it can now be compared to the big boys. But in addition to its almost identical functionality, the Monsieur Cuisine Smart from Lidl has another great advantage: its price. Indeed, the robot is offered at a price three times lower despite the slight inflation it has experienced. While the Monsieur Cuisine Connect multifunction food processor could already do almost everything, the Smart version is even more complete. It is on these particular points that we appreciate the brand’s products. Indeed, SilverCrest always tries to offer new products on the market with each new launch.

TheMonsieur Cuisine Smart is well on its way to remaining the leader of the multifunctional food processor sector at affordable prices, not to say low cost. Indeed, the term low cost could be associated with a low-end product of poor quality, which is absolutely not the case with this food processor which, despite its very low price, offers some of the most efficient cooking results and programming on the market. In terms of quality-price ratio, it is without a doubt the most interesting food processor. To be confirmed during a full-scale test.