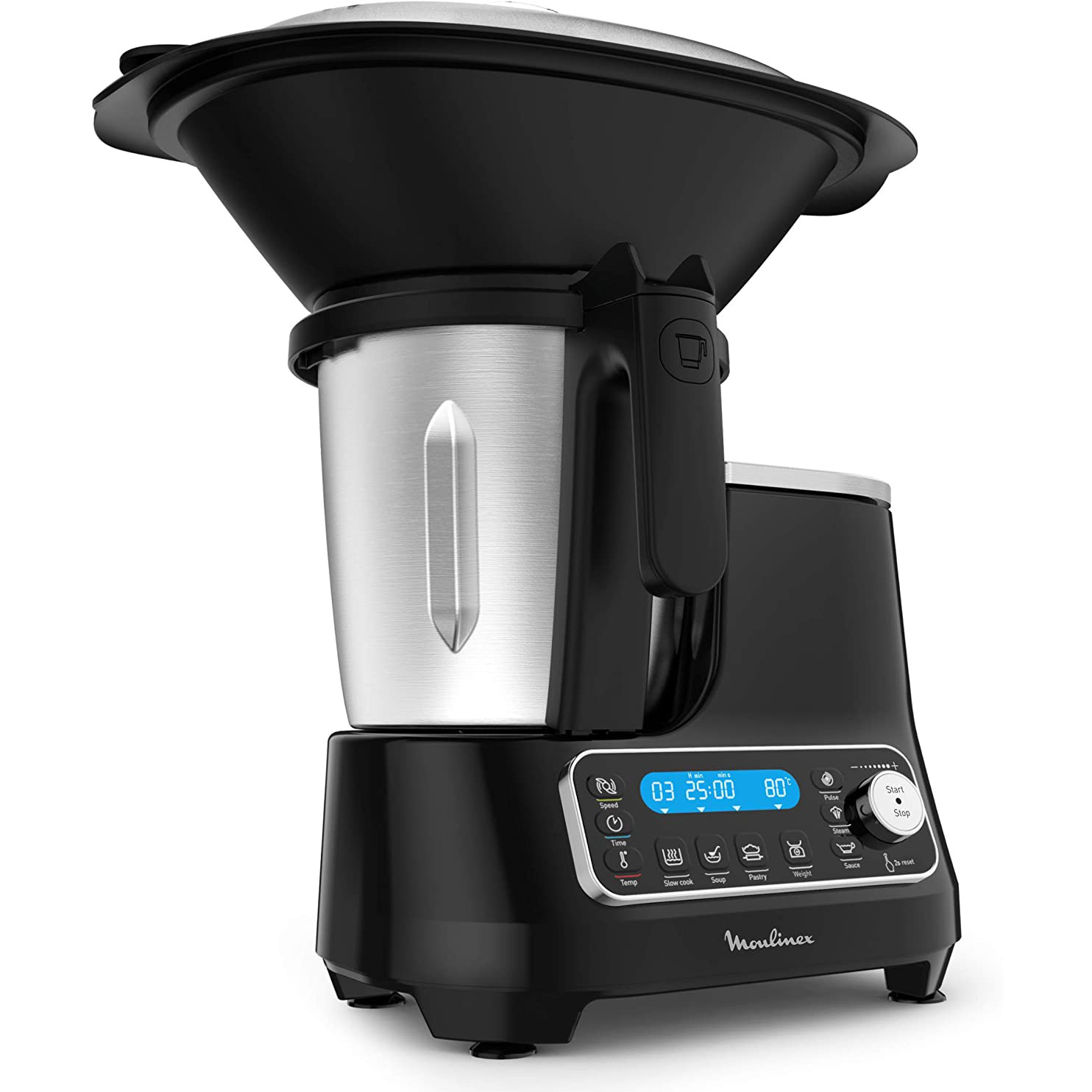 Moulinex has created a nice reputation on the multifunction food processor market. Among others, its two star food processors the Cookeo and the Companion. Since then, the manufacturer has continued to develop ever more affordable products. This is how the ClickChef was born in late 2020, the latest low-cost robot from the firm. This one was born with great ambitions on this ultra competitive market. However, will its characteristics allow it to become one of the best sellers on the market?

Brief presentation of the latest robot from Moulinex

Offered for less than 320€ on the manufacturer’s website, the Moulinex ClickChef 1400W is interestingly positioned on the increasingly competitive market of multi-cookers. You can even find it for less than 300€ in some online marketplaces. At this price, the ClickChef is one of the cheapest food processors on the market, just ahead of the leading food processors in the range, the Silvercrest Monsieur Cuisine Connect from Lidl, the Digicook from Arthur Martin sold by Intermarché or the Fagor Connect from Carrefour. In the Moulinex range, this one is clearly positioned behind Companion, the brand’s top-of-the-range multifunction food processor. Its characteristics are much less sophisticated than those of its big brother, the Companion, making it more like the Monsieur Cuisine Edition Plus.

A food processor with a poor finish

The Moulinex ClickChef is a fairly compact food processor which is very practical since it does not take up much space on your kitchen counter. The robot is indeed shallow which allows it to be easily installed in the kitchen. The low price of the food processor means that it has some low quality aspects in some areas. For example, the bowl does not have the double wall that its big brother the i-Companion Touch Xl offers. The lid is not perfectly designed with a relatively difficult nesting. Moreover, when the bowl is placed on the motor block, it is quite impossible to place or remove the lid, which can be very restrictive in use. On the other hand, we appreciate more the handle allowing to manipulate more easily the bowl than the two side handles present on a great number of rival robots.

In terms of functionality, the robot has a bowl with a limited capacity of 3.6 liters, of which only 2 liters are useful. This allows it to provide the essentials, namely dishes for 4 people. Moreover, the robot does not have a touch screen, which is highly regrettable given what its slightly more expensive rivals offer. Indeed, its design is quite rudimentary with a simple little display surrounded by physical keys. If you already have a Moulinex food processor, you will be relatively comfortable with this display since these keys were already present on the brand’s previous non-touch models. At first glance, you can feel the manufacturer’s firm intention to distinguish the two models and justify the substantial price difference between them.

The integrated functions of the ClickChef robot

The food processor has all the functions you would expect to have when you buy this type of appliance. The food processor has functions for preparing all types of recipes, including sauces, pasta, etc. In total, the robot offers 32 functions, including 5 automatic programs. However, it is surprising that the programs are only available in English. So you will have to familiarize yourself with the terms for temperature, speed, duration etc. In addition, the robot is not capable of grating food.

In addition to the automatic programs, the food processor can also run a manual program. To do this, you can vary the speed of the blades between 1 and 10 in addition to the pulse mode. As for the temperature, it can be selected in 5°C steps within a range of 30°C to 120°C. Finally, the duration can be programmed between 1 second and 120 minutes. Note that it will be impossible to start any cooking without a time indication.

The robot also has an integrated scale that is located on the right side of the ClickChef. We appreciate the accuracy of its weighing since it is precise to the gram, while most of its rivals are precise in 5 gram increments. The scale can go up to 5 kilos. This feature is quite surprising since its big brother, the i-Companion Touch XL only comes with a scale as an accessory. Maybe this will be corrected with its replacement. In addition, the inner and outer steaming baskets will allow you to prepare healthy recipes by steaming. Finally, the robot also includes a mixer, a spatula and a book of 200 recipes as accessories. We note the absence of a vegetable grater as an accessory, which is surprising given that the robot is not capable of doing it by itself.

The ClickChef is easy to clean as all the accessories can be washed in the dishwasher. The weight of the bowl is quite contained at 1.2 kilos which makes it easy to clean by hand. The blades are removable which will allow you to have access to the bottom of the bowl.

The full-scale test of the robot’s features

The quality of the blending is satisfactory since the blades of the Moulinex ClickChef cut a whole onion without difficulty and without the slightest loss of power. The cutting result is good with a clean cut even though the pieces are of different sizes. The blending function also fulfills its responsibilities with a very satisfactory soup preparation quality. The result is homogeneous and liquid with very little fiber. The same goes for the cooking quality, which shows convincing results. In addition, the food processor heats up very quickly with a temperature that is respected and homogeneous in all four corners of the bowl. Only a few minutes are needed to bring the food processor up to 100°C, compared to almost a quarter of an hour for most of its rivals. In use, this food processor is very discreet with less than 50 dB on average. No problem to use it in an open kitchen.

All in all, this food processor, which seems to be inspired by Silvercrest’s Mr. Kitchen Edition Plus, is quite convincing in use. Although it does not offer guided cooking due to the absence of a digital display, the robot nevertheless performs well in terms of preparation quality. This 32-function appliance is more than enough to perform its daily functions. It can do practically everything. We only regret the absence of the grating function and its programs in English. Also, be careful with the quantities prepared since the bowl has a capacity limited to 4 people only.

At this price point, it is true that this robot offers one of the best value for money on the market. However, for a few dozen euros more, you can take advantage of devices that are just as good, but with a more ergonomic design and comfortable to use with the presence of a large touch screen.