The concept of batch cooking revisited with the Thermomix from Vorwerk 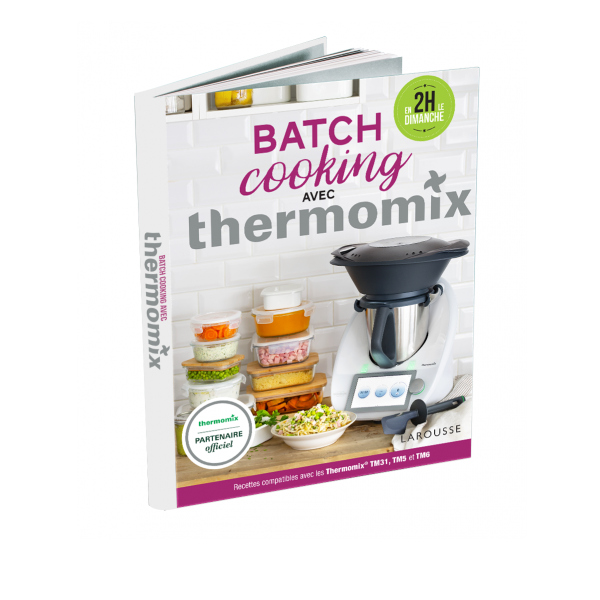 The concept of “batch cooking” has recently been imported from Anglo-Saxon countries. The principle of batch cooking is simple. As its name suggests (cooking in batches in French), it is simply a matter of preparing in advance all the ingredients of different recipes in order to free up time during the week by avoiding long cooking sessions.

This concept has actually existed for several decades. However, it has clearly come back into fashion in recent years for several reasons. Batch cooking actually encompasses 2 distinct concepts, namely either a preparation in advance of the different recipes of the week or a preparation in large quantities of a specific dish. In the first case, it will be sufficient to simply reheat the dishes prepared in advance during the week, while in the second case, the large quantity will make it possible to serve the same dish again during the week or to serve it in another form such as a salad.

However, the concept is similar in that it is possible to devote a few hours to preparing the dish in advance before freeing yourself from cooking time during the week.

The multiple benefits of batch cooking

Several benefits are associated with the concept of batch cooking and explain its success. First of all, it saves a considerable amount of time. In fact, tasks are grouped in one session rather than multiplied over the course of the week. It is faster and more efficient to grate 3 carrots at once rather than 1 carrot per day over 3 days. The time saved increases with the size of the family that makes up the household.

In addition, it forces you to eat well in some ways. Indeed, the preparation upstream guides you in your choice of dishes during the week which avoids you to eat ready-made dishes in supermarkets or to eat at fast-food restaurants. In addition, cooked food keeps well. You won’t have to worry about the quality of the dish when you reheat it. All you have to do is let the dish cool down before freezing it. However, some foods are unlikely to keep, such as fish, which should be eaten instantly.

Finally, this can be an economic activity to share with the family. All members of the household can be involved in planning and preparing the week’s meals. Once the planning is done, shopping will be more efficient because it avoids turning to non-essential products and avoids last minute trips to the corner grocery store.

The batch cooking co-developed with the Thermomix

Produced in partnership with the Larousse, the batch cooking developed by the German manufacturer Vorwerk makes it possible to prepare all of the week’s meals in barely 3 hours. Published in February 2020, the recipe book integrates the current constraints of households to make it a force to be reckoned with. Indeed, Vorwerk meets the current expectations of a standard household, namely to eat well all year round despite the limited time available for cooking. In addition, the recipes are perfectly adapted to the use of the Thermomix.

To this end, the book integrates several recipes with limited ingredients and relatively simple to store. However, this does not limit the variety of dishes since the book integrates more than 80 recipes covering all seasons. In addition, the recipes require few dishes since only airtight containers are required. Finally, all the recipes are balanced and suitable for weekday storage. The ingredients are relatively economical, which allows you to make tasty and inexpensive dishes all year round. All in all, if you are a batch cook and your time during the week is precious, this method of organizing weekly dishes with the Thermomix will suit you. With quick and varied recipes, you will be able to plan and prepare all the meals of the week in a few hours. However, although the manufacturer announces 2 hours for the complete preparation, according to the majority of the customers’ opinions, it will be necessary to plan around 3 hours, which remains always very interesting.

Sold at a price around 30€, the recipe book can definitely become your best ally in the kitchen.

Organization of your batch cooking

The main trends will be defined for each season:

You can organize yourself with a program in monthly mode: