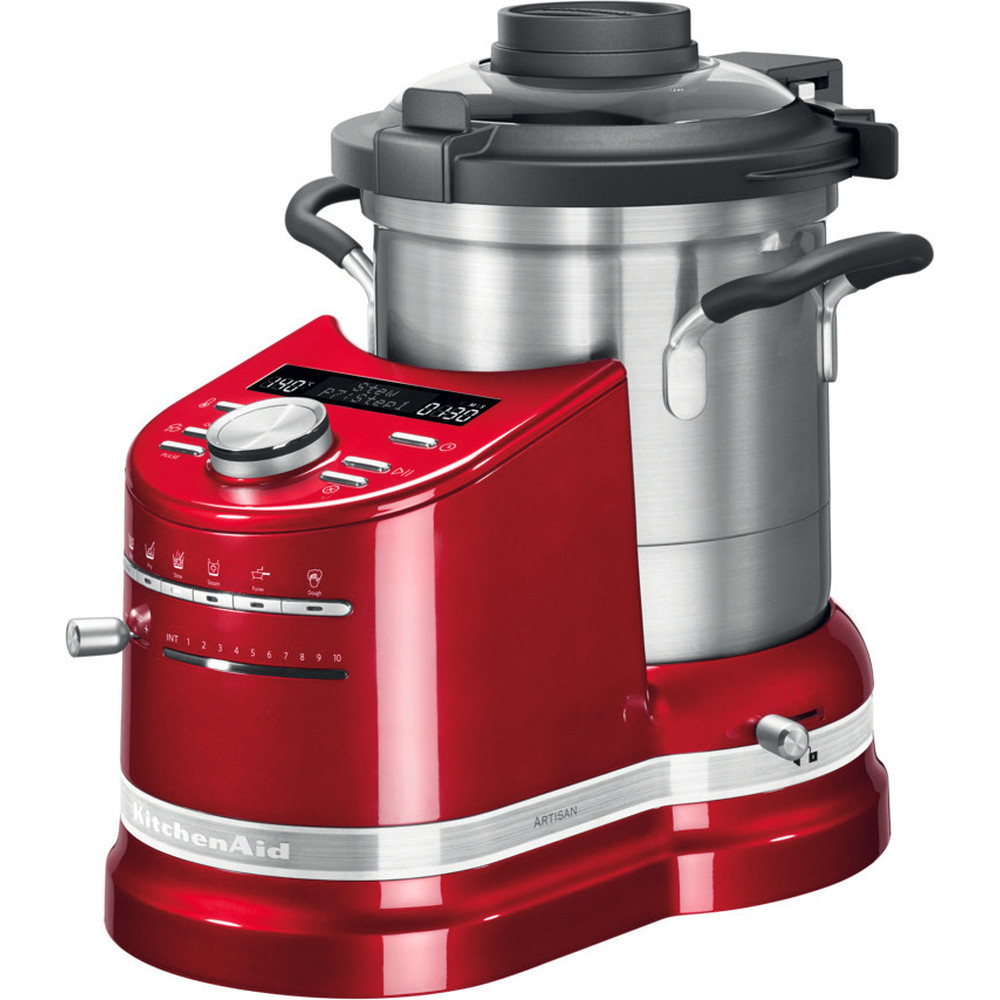 Launched a few years ago, the Cook Processor from Kitchenaid is sold at prices between 999 € and 1029 € depending on the model. It is therefore clearly positioned at the level of high-end food processors such as the Thermomix TM6 or the Magimix, or even the i-companion touch xl from Moulinex. But does it meet the requirements of the current market? Here is a small test of this robot.

Like other multifunctional food processors available on the market, the Cook Processor is a device capable of doing everything, i.e. kneading, chopping and mixing preparations, cooking, etc. However, it differs from the competition in that it can be used to prepare food in a variety of ways. However, it differs from the competition in that it comes with a bowl and grating and slicing discs. This plastic bowl works with a specific rod that receives, according to your choice, the grating disc or the raw food slicing disc. We welcome the presence of these practical accessories since they allow the user to prepare raw vegetables. We can therefore speak of a true multifunctional food processor.

Be careful, however, to prepare some space on your work surface since this multifunction food processor is quite bulky with more than 34 centimeters in length against 31 in width and even 41 in height. It goes without saying that the robot is rather heavy, since it weighs more than 10 kilos. You will therefore have to find a space for it on your work surface and not move it. As for capacity, the main tank of the KitchenAid has a total capacity of 4.5 liters for 2.5 liters of useful capacity, enough to satisfy a family of 4 people. This is a fairly standard volume.

Finally, the KitchenAid Cook Processor also comes with an internal steam basket, an upper steam basket that fits on the lid, a spatula and a recipe book. Furthermore, in addition to the book, you can download the Cook Processor app which is free and available on iOS and Android systems. The app is pretty comprehensive in offering instructions on how to use the processor’s accessories, as well as additional recipes and brand information. Through the app, you’ll also be able to categorize your recipes by type and preparation time.

A robot that pays for its years of design

With its bowl and slicing discs, the KitchenAid is on paper much more complete and versatile than other multifunctional food processors. Unfortunately, in practice, the opposite is true, first of all because of a display that is not very ergonomic, with a relatively small screen and an unclear digital display. The whole thing lacks overall intuitiveness and clarity when manipulating. Moreover, the physical buttons lack indications and leave some doubt as to their functions. Indeed, there is no indication whatsoever, except for icons, on the few buttons of the control panel.

Like its competitors, the Cook Processor is fully capable of operating with automatic programs or in manual mode. In total you can choose between 6 automatic programs. In reality, these are more like automatic semifinished programs, since if you want to make certain preparations that require several cooking modes, you will have to link them together, since the robot is not capable of doing this by itself. For example, if you want to prepare a recipe that requires cooking as well as mixing. You will have to run these 2 programs consecutively. The robot is paying for the years that separate it from the latest, much more ergonomic models.

For example, when setting up a preparation, you will have to juggle between the control modes. First, you have to select the first parameter of your preparation via the relevant button (temperature for example) before setting it with the central wheel. Once this parameter has been defined and set to the right level, you can switch to the second parameter, following the same procedure. This step must be repeated for each new action requested of the robot. On the other hand, to select the speed of rotation, you will have to use the speed control that you will find on the front of the device. You can adjust the speed by pressing the lever to the left to reduce the speed, and conversely to the right to increase it. As you can see, this robot requires a certain amount of time to adapt because of its design, which is not very ergonomic in our opinion.

As for maintenance, the brand offers accessories that are fully compatible with dishwasher cleaning. The bowl is also dishwasher safe. Nothing to say then, except that it is particularly difficult to remove the lid because the seal is a little too thick. This thickness hinders the maintenance since food residues get embedded in the wall of the lid. Not very efficient functions for a food processor of this level

The chopping function of the food processor suffers slightly from a lack of power. So to chop products, you will sometimes have to raise the power level beyond the indicated level. Some products, such as onions, must even be chopped at the maximum power level to ensure a satisfactory cut.

However, the quality of the blend is sufficient. As far as cooking is concerned, the food processor is rather slow in heating up. Moreover, once it has reached maximum temperature, the food processor exceeds the temperature in certain areas of the bowl before stabilizing. Finally, during our test, the robot did not respect the indicated temperature levels, with differences of more than 30°C in some places in the tank. Therefore, one cannot blindly rely on the display parameters. You will need to monitor the cooking process to avoid missing your recipe. On the other hand, as far as noise is concerned, the Cook Processor is one of the least noisy food processors in its category. This is mainly due to the low power of the processor, which barely exceeds 100 W. Power consumption is also low compared to other food processors.

All in all, the KitchenAid Cook Processor has obvious assets such as its rather successful design, which is important for a food processor that you will not move around much. We also appreciate its discretion in use. The Cook Processor can therefore be used easily in an open kitchen. Moreover, the Cook Processor is absolutely multifunctional thanks to the grating accessories provided.

On the other hand, the food processor does not perform well in terms of cooking and mixing. Indeed, the Cook Processor is not very precise in maintaining the indicated temperatures with sometimes unacceptable deviations for a food processor of this price. As for mixing, it lacks tone. The KitchenAid Cook Processor can therefore mislead the novice user.

Moreover, the programs of the multifunctional food processor lack practicality for everyday use. We deplore the absence of a real automatic program, which could be annoying for a user who wants to limit his interventions in front of the robot. In the end, the robot provides the essentials but pays the price of years of design compared to more recent and more accomplished competitors. For all these reasons, the Cook Processor could be suitable for cooking enthusiasts but not for beginners who want to be completely guided during the preparation of their recipes.