The Livoo Super Cooker: a serious competitor for the Mister Cuisine Connect? 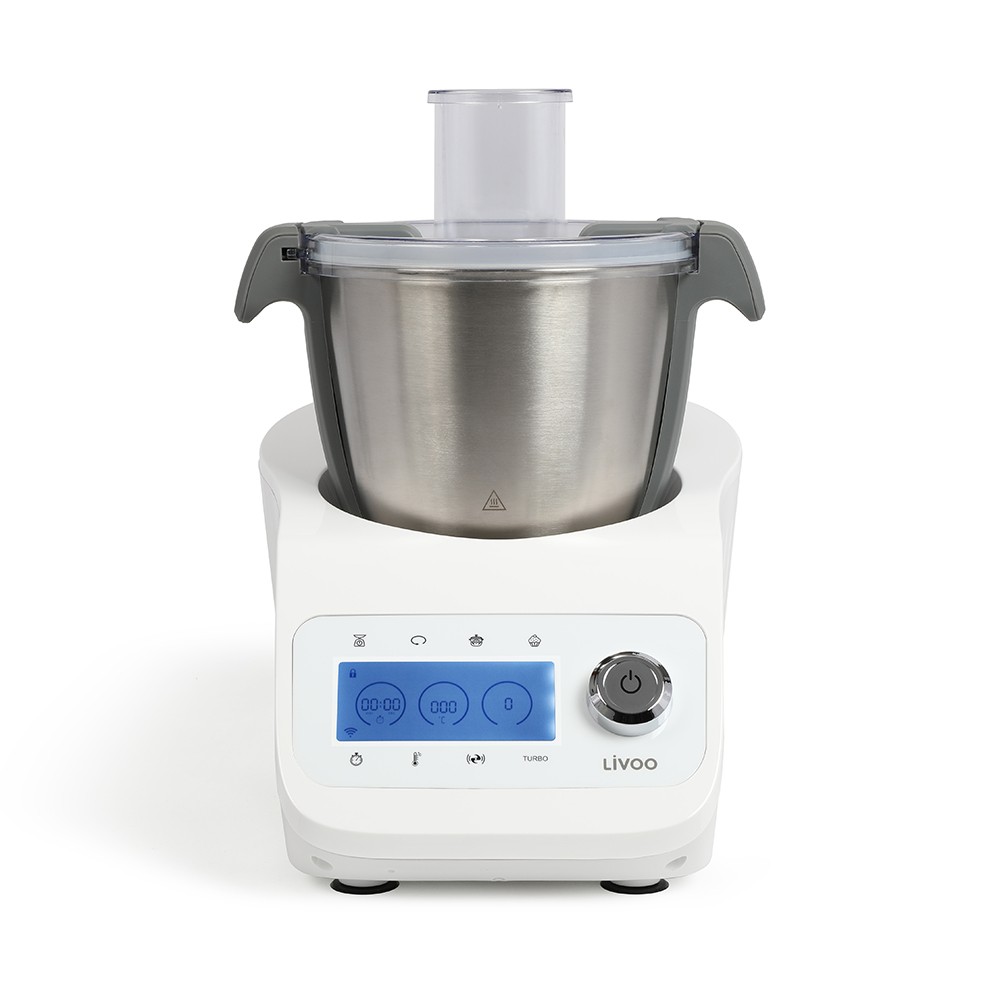 Livoo, a manufacturer of small appliances at very low prices, has just struck a blow on the market of food processors with its Super Cooker at less than 300€. But is it enough to compete with the low cost robot star of Lidl? Here’s a quick look at the question.

Livoo is a French manufacturer located in Alsace and specialized in the design of mid-range products at affordable prices. The brand is quite young since it has only existed since 2018. Today, the brand offers a multitude of household appliances. You will find microwaves, ovens, pancake makers etc. Among these numerous products is the Super Cooker food processor. Offered at less than 290€ and designed to compete with the famous Mr. Connect kitchen from Lidl, the Super Cooker from Livoo is the latest food processor from the brand.

A food processor with undeniable qualities

The Super Cooker food processor has features that are at the level of market standards. The multi-function food processor indeed offers multiple functions to meet your expectations. Thus, the food processor can perform standard cooking, steaming, making sauces, kneading, chopping, whipping, simmering. The robot can also grind or mix preparations, mince, grate, and many other functions. As you can see, with nearly 30 different functions, it can do everything! To achieve this, the food processor comes with a 3.5 liter cooking bowl. Its useful capacity is 2.3 liters, which is enough to satisfy a small family of 4 people.

Moreover, we appreciate its very intuitive side thanks to its very easy programming on its LCD screen. Indeed, you can easily follow the different steps of the recipe thanks to its intuitive cooking program. As soon as the cooking program comes to an end, the Livoo food processor stops automatically and a little beep sounds to let you know it’s over. The features of the robot do not stop there since you can also program the temperature, the speed and the cooking time.

The Super Cooker: a faithful companion for the elaboration of all your recipes.

The robot is capable of making all types of recipes, whether they are ready meals, sauces or desserts. To do this, the Super Cooker comes with several accessories, namely:

In addition to these accessories, you will find a cooking lid that thanks to the silicone seal closes tightly. All these accessories coupled with the features of the robot will allow you to make most existing recipes. The latter comes with a recipe book containing no less than 113 recipes ranging from the simplest starters to the most sophisticated desserts. Of course, you will also have the opportunity to make other recipes not included in the book, which will leave you plenty of choice. Overall, cooking with this food processor is very simple.

The appliance will allow you to make recipes from start to finish, which will simplify your daily life. It even includes a scale so that you only need to use the food processor during the entire preparation process. Note that the robot offers 3 weighing systems, namely directly in the bowl, in the steam basket or on the lid. Also, the multi-cooker has a self-cleaning program, which is a very useful feature, especially after preparing dishes with sauce. In addition, all the accessories are dishwasher safe. Finally, thanks to the 90-minute timer, you will be free to go about your business while your meal is cooking. If a recipe requires a specific action on your part, such as adding an ingredient for example, you will be alerted by a beep.

The technical limits of the food processor

Given the very low price, one cannot expect the Super Cooker to be perfect. First of all, the food processor is unfortunately not equipped with a touch screen. So we will regret the guided cooking functionality. Instead of the touch screen, you will have a control panel that can be manually set at the temperature, varying between 37°C and 120°C, and the speed of rotation of the blades in 12 levels. The timer can be set up to 90 minutes. We also regret the absence of an automatic cooking or preparation program. Consequently, it is not possible to be guided during the preparation of recipes. You will have to rely solely on the recipe book that comes with the food processor. Finally, the results of technical recipes can sometimes be disappointing. This is especially true for pastry recipes, for which only the best food processors are able to master the preparation. In conclusion, the Super Cooker is a relatively efficient product. In concrete terms, this food processor is capable of doing everything while ensuring the essentials. With this food processor, you will have a real kitchen companion capable of making your recipes, from appetizer to dessert. However, it seems slightly presumptuous to us to say that it can position itself as a real competitor to the Mr. Cuisine Connect.

« Thomson I-Genimix, an ultra compact connected robot The robot for the start of the 2021 school year: presentation of the brand new Lidl multifunction robot »