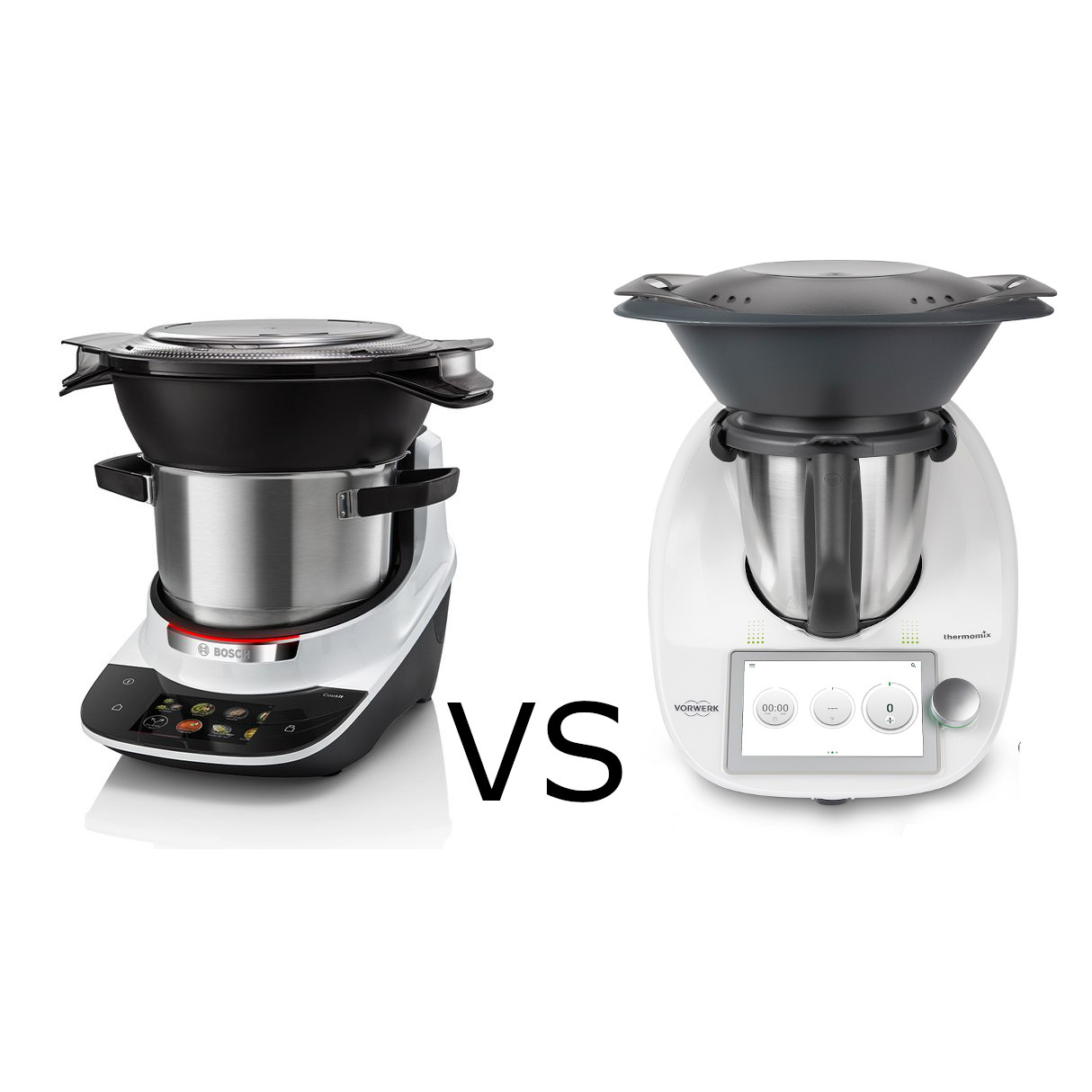 Presentation of the Bosch Cookit

Announced a few months ago, the Bosch Cookit robot has finally been available for pre-order since the beginning of February. Offered at a price of 1299€, it competes directly with the TM6 in the premium multi-cooker robot market. The first deliveries should be made by the end of March. Although it is rather late on the market, it nevertheless meets customer expectations with a lot of promises. First of all, the robot offers a 3-liter tank that can produce meals for up to 8 people. Opposite, the TM6’s tank is limited to only 2.2 liters, which limits the service to 5 or even 6 people.

Moreover, cooking temperatures can be managed down to the degree and can reach up to 200°C at the bottom of the bowl. It is quite simply the first robot to combine high cooking temperatures with a large capacity bowl. You will have no difficulty in cooking the meat pieces. Its advantages are therefore undeniable. Another novelty brought by this robot is the Alexa voice command that allows the robot to be managed vocally once it is connected to the user’s smartphone.

In addition, the other features of the robot are largely at the level of the market with a large 5-inch touch screen placed on the front of the tank, an integrated scale, 24 automatic cooking programs and 27 different functions. In addition, the robot includes a list of more than 150 recipes that can be added to later.

If we focus on the screen, it integrates 3 modes of use namely :

In terms of accessories, the robot is equipped with several utensils to perform the 27 functions it offers:

In addition, all the utensils are made of fiberglass reinforced plastic material to be more heat resistant. Finally, note that the robot does not overlook safety and practicality thanks to thermo-insulated handles that allow you to handle it easily and avoid any risk of burning. The lid has been ergonomically designed to stand upright. However, it can be removed completely, which can be useful when it is put in the dishwasher.

The Thermomix TM6, a robot that no longer needs to be presented

The Thermomix TM6 is the current market leader in high-end robots with a strong experience consolidated by several commercializations. It has the same features as the Cookit from Bosch, namely a touch screen with integrated recipes, automatic cooking programs and a manual mode. It also offers an integrated scale. The quality of the dishes prepared by the TM6 is excellent, with preparations faithful to the original. In the previous test of the thermomix TM6, which you can find on our blog, the results were very satisfactory. Since then, the situation has not changed since it remains without a shadow of a doubt one of the best robots on the market.

However, this does not mean that the manufacturer relies on its achievements. Indeed, Vorwerk continues to innovate by bringing new features to the market, such as the Thermomix Friend, the new companion robot to the TM6. In our previous test, we pointed out a weakness in the capacity of the bowl, limiting preparations to 5 or even 6 people. This shortcoming has recently been corrected thanks to the Thermomix Friend. This robot works in duo with the TM6 since it connects to the latter via Bluetooth. As a result, the user can either prepare dishes that require several preparations in parallel, or prepare the same dish but with larger quantities. The recipes can then fill tables of up to 10 people, which is totally new on the market for multi-cooker robots. For simultaneous preparations, the user can make them in half the time. However, a minimum of 400€ is required to take advantage of this feature. This can be a problem given the investment required for the TM6. Remember that the TM6 is sold alone at 1300€.

Our final opinion on this duel

The TM6 robot from the German manufacturer continues to win the top step of the podium thanks to functionalities that are always at the top of what can be done on the multi-cooker robot market today. In addition, the manufacturer continues to incorporate customer feedback into its new products, especially regarding volume limits, for which it now offers a companion robot.

Opposite, the Cookit has been designed to meet the needs of everyone, whether in small groups or in larger numbers, from breakfast to dinner. The Bosch Cookit is particularly distinguished by its ability to prepare meals for large tables (up to 8 people) while the TM6 cannot guarantee meals for more than 6 people. Its cooking promises to be very precise thanks to temperature management down to the degree. You will then have the opportunity to prepare difficult dishes in a serene manner. The robot is also capable of searing pieces of meat that the Thermomix TM6 cannot do thanks to its temperatures of up to 200°C and its flat bottom that can act like a frying pan.

All in all, the Bosch Cookit Robot could turn the hierarchy upside down, since it incorporates all the weaknesses of the TM6, i.e. wider temperature ranges and a larger tank, all at the same price.

We are therefore waiting to see the commercial launch of the robot to estimate its potential for attracting customers. However, if you hesitate to buy one, the manufacturer plans to gather potential buyers around culinary workshops to convince them and boost its sales.