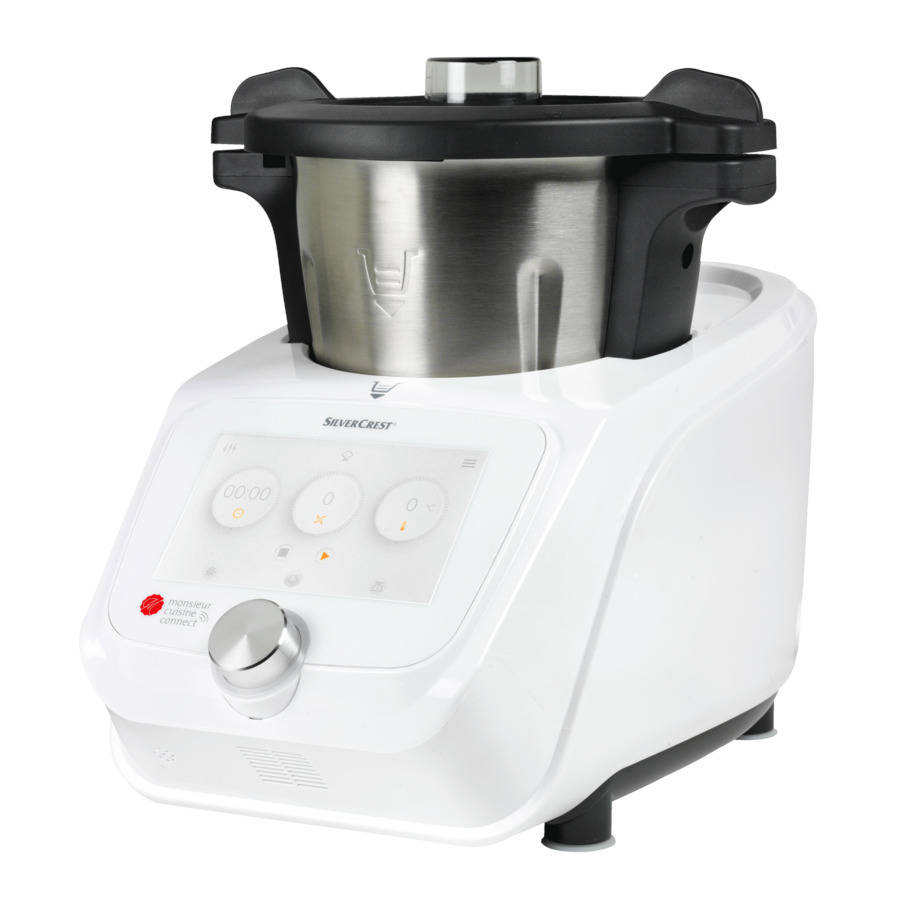 You’ve probably heard about theMonsieur Cuisine Connect self-cooker. It is a robot released by Silvercrest, the brand of Lidl. This appliance went on sale on 3 June 2019 in all Lidl stores. However, since this is a collaboration, stocks were very limited, which led to an almost immediate stockout, and even a rush in the majority of stores. It is in this sense that Lidl relaunched the fruitful collaboration at the end of December by offering the robot cooker at the price of 359€. What’s more, when you buy a Monsieur Cuisine Smart Cuisine Connect robot from Silvercrest, you will receive a cookbook with recipes. This is mainly a paper version as all the recipes are integrated into the digital menu of the robot and its large 7-inch touch screen. Small review in detail of the device.

As its name suggests, this robot cooker is surprisingly versatile, offering almost all of the existing functions. In addition to the manual mode, with personalised management of the appliance, the robot offers 3 specific modes which are the kneading, seizing and steaming functions. For the latter mode, the robot is delivered with 2 steam bowls, one flat and one deep. The small tray will mainly be used for non-bulky food while the deep one could be used for bulky products such as potatoes. The capacity of the trays is designed for dishes of up to 6 people. Beyond that, you will have no choice but to perform the operation in 2 steps.

In addition to the 2 steam trays, the robot is delivered with several other accessories:

As you can see, the robot is complete, and it’s a real success. The product is relatively ergonomic although imposing. However, this can be explained by the container which has been revised upwards in order to be suitable for a family of 6 people.

Practicality in everyday life in order to make good recipes

Sometimes we all wonder what to do with leftover ingredients in the fridge. With Silvercrest’s pressure cooker, there is a function where you can enter the name of the ingredient in question. The auto-cooker will automatically suggest a recipe accordingly. Another handy feature is the search function. Simply enter an ingredient name and the multi-function food processor will display a list of all the recipes you can make with the ingredient. Moreover, you will also be able to filter according to the type of dishes (starters, appetizers, dessert, main course, etc.) in order to better target your recipe search.

In addition, the robot is connected to wifi, which means that as soon as the manufacturer updates its recipes, you will immediately receive them on your multifunction robot. Indeed, they will all be integrated in the novelty section. So do not hesitate to consult the section in order to make new recipes.

On the cooking side, the robot also allows you to set the temperature as you wish. This option is very practical, especially for growing the dough and activating the baker’s yeast. For example, you can set the food processor directly to the recommended temperature to activate the properties of the yeast and put your dough in excellent conditions. Indeed, since it is closed, the robot can maintain the desired temperature, which allows you to obtain a perfect dough.

Also, the machine has a safety function that stops it immediately if it overheats or if elements are incorrectly installed. Ideal therefore to preserve the life of the machine, and to avoid any disaster in case of non-supervision. Finally, in addition to all of the above functions, you have an integrated scale. You will then be able to add the necessary quantities immediately with the robot. Indeed, each time you add an ingredient, you can reset your scale to 0 with the tare function. This option makes this robot even more complete than it is.

In short, in order to make your recipes, you only need to follow the recipes to the letter, and in particular the cooking times or quantities required. The robot has been designed to make your daily work easier.

The few negative points that won’t interfere with daily use

Although the balance sheet is very positive, there are still a few negative points to be noted. One example is the availability of spare parts. Indeed, the latter seem to be in short supply from the manufacturer.

As far as storage is concerned, its cumbersome nature can also hinder some users on a daily basis. This is why it is recommended that it be placed permanently on the worktop and not moved.

Detail of the device

In order to better understand the functions of the device, here is an exploded view of the different parts of the robot: