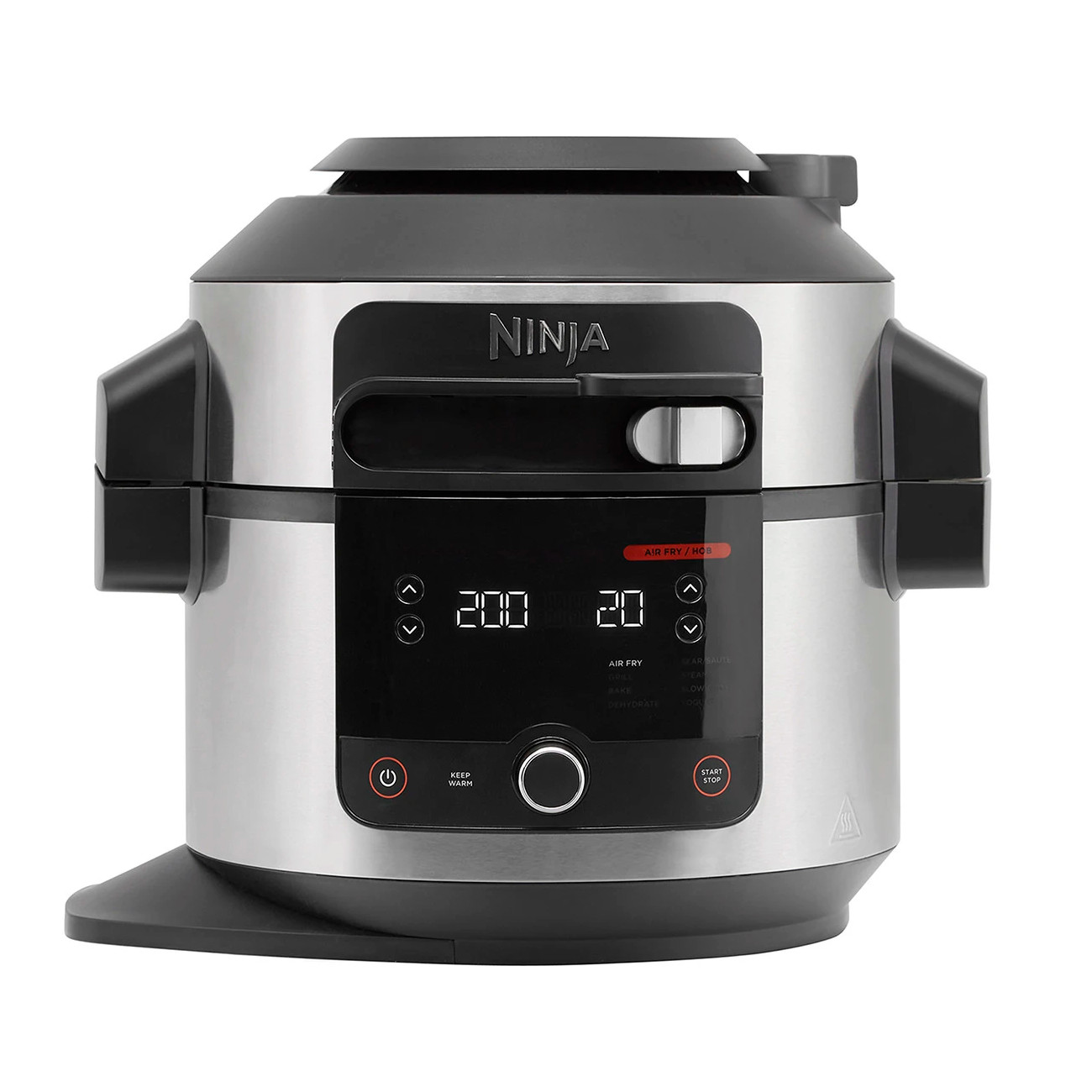 Ninja’s latest food processor, the Foodi OL550EU, is an 11-in-1 multi-cooker that is also the most affordable of the Ninja family with a price tag of less than 250€, without being the least complete. This model is dedicated to the European market and has a different interface than the US Ninja Foodi 11-in-1 6.5-qt Pro Pressure Cooker & Air Fryer FD302.

The robot comes with a few accessories including : a crousti basket as well as its detachable base for frying. This basket has a capacity of 3.7l, which corresponds to approximately 1.1 kilo of fries, according to the manufacturer. and a grid of elevation: this grid can raise the preparations to be able to cook on 2 levels.

The cooking programs are less complete, but there are still special features such as pressure cooking, oil-free frying and the grill function. With the new Smartlid, it is even possible to combine steam and pulsed heat with the Combi-steam programs.

Overall, the Ninja OL550EU offers 11 programs, which is quite good in the market of food processors under 300 euros.

In order to select a program, you will have to use the cursor and the wheel. The different programs will appear on the display. With the left arrow, you can adjust the temperature while with the right arrow, you can adjust the cooking time. This will be adapted to the selected cooking mode. For simmering, the duration will vary between 4 and 12 hours. For frying, it will vary between 1 minute and 1 hour, etc.

The food processor has enough capacity to satisfy a small family with its large 6 l tank, which should not be filled beyond 4.5 l, or even 4 l for pressure cooking. With its large diameter (24 cm), the bowl can accommodate any target food, including the largest pieces. However, avoid using metal utensils that could damage the non-stick coating of the bowl.

Finally, the food processor can be easily cleaned from the outside with a damp cloth. As for the bowl and the accessories, the manufacturer indicates that they can be cleaned in the dishwasher.

Ninja OL550EU: a robot that would gain in intuitiveness

In use, the food processor is intuitive even if the absence of a real digital screen is felt. Indeed, the panel gives some information on the programs, but it is impossible to display recipes as you would find with many competitors.

To start a preparation, nothing could be simpler: you just have to add all the food in the recipe, then select the right cooking program. As soon as the timer runs out, the meal is ready. However, we regret the absence of a language setting for the robot. Unfortunately, it is only configured in English. You will have to turn to the user manual if you want to get translations.

The robot has two heating elements and 11 cooking programs that make it one of the most complete multicookers on the market. Here is the complete list of the Ninja OL550EU’s cooking programs:

A lack of precision compensated by a wide temperature range

When testing the different cooking programs, the results are guaranteed without being perfect. The robot sometimes lacks precision with a not very homogeneous heating. For example, the temperature at the bottom of the bowl can vary by several dozen degrees in some cases, which can distort your cooking results. But thanks to its wide temperature range, you only need to have the knack to master your recipes. Nevertheless, it will satisfy your needs.

Finally, for daily use, we regret the lack of recipes accompanying the robot since only fifteen recipes are proposed. However, the cooking chart indicating how to cook a food precisely can give you new recipe ideas.

In addition, Cooking Circle, a site powered by the Ninja community, is offered as a complement to the robot. But the platform does not yet have many recipes saved for the Ninja OL550EU food processor.

All in all, for 250€, it will be very difficult to do better. This food processor is very complete while guaranteeing a good level of performance. Thanks to the combination of 11 programs, the food processor will save you a lot of space on your work surface.

Among the strong points of the Ninja OL550EU, we particularly appreciate the integration of hot air and pressure cooking in the same robot. We also like the large capacity of the bowl as well as the grid that allows you to cook food on 2 levels.

On the other hand, there are a few shortcomings, including a relatively long frying time compared to a classic fryer, a poorly developed recipe book and a community site that is still in its infancy. Moreover, the robot is designed entirely in English and has some slightly noisy modes like the Grill mode.